The Fig Garden Woman's Club was founded on March 9, 1921, when a group of thirteen young women living on ranches in the northwest area of  Fresno met together to organize a ladies club. Officers were elected, it was agreed to meet on the 2nd and 4th Wednesday of each month. The name and motto were postponed until the next meeting. It was moved and carried at this time to admit 21 new members. Membership was 25 cents per year.

“The object of this organization shall be to cultivate the social  and intellectual natures of the members, to encourage cooperation for the civic betterment of  the district, and to act upon such other matters for     the mutual benefit and betterment of the members of the community.” 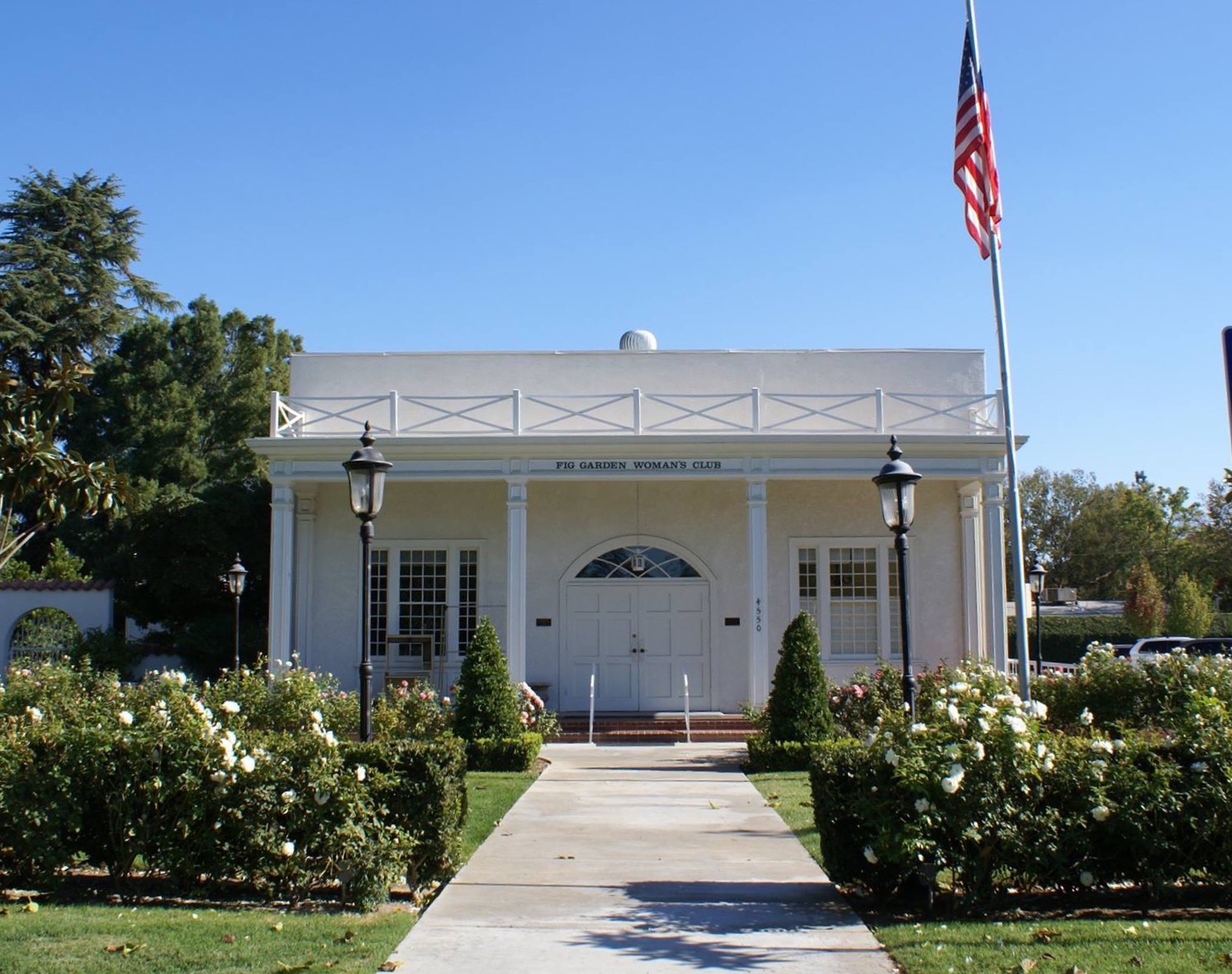 It was moved and carried that the name of the club be “The Fig Garden Women's Club”. The emblem a “Fig Leaf” and the color, “green”. Motto “Home and Community”. By-Laws thoroughly discussed, amended, finally adopted and placed on file. It was moved and carried to meet alphabetically at each home.  Refreshments consist of but two articles. A tax of 5 cents be placed on each member at each meeting for refreshments.

A committee was appointed to call upon Mr. Forkner and see what arrangements could be made for a small tract of land for a prospective Clubhouse.

“The afternoon was brought to a very fitting close by the musical strains from the  Victrola of the State song  “I Love you,  California.”

The Club attracted a great deal of interest from its beginning, and members desired to have their own Clubhouse early on.  They worked enthusiastically to raise money for the Clubhouse fund.  When Mr. J. C. Forkner gave a number of used band instruments to the organization, they were sold to swell the Clubhouse fund.  A dance committee was formed to give dances every Saturday night at the Bullard School auditorium, and this income was added to the fund. The Treasury contained $31.57 and so the “Clubhouse fund “ grew, 10, 15, 25, 50 cents and a dollar at a time.

Projects included:  Get togethers with the teachers and club ladies in which the children took part and refreshments were served.  Transportation for the school children, child welfare was a concern;  school lunches provided, (five needy children were to receive free soup) purchased one piece of play ground apparatus for the sum of $18 and presented to the school.  Christmas: Santa was present and treats given to the youngsters.

Dress Making section made aprons to sell for profit;  working on a quilt for sale and made things for the “Old Folks Home”;  a member collected wraps for a poor family in the mountains;  Home and Garden Committee to help look after the shrubs beautifying the school yard.  The patriotic celebration of Washington's Birthday and a splendid “Flag Day” program was given.  For Arbor Day (the State of Nebraska created Arbor Day in 1872 to honor trees) a short program was given by the school children and a Black Mission fig tree was planted by the Club in memory of the Club and our  first Arbor Day.  (Bullard School) Teachers asked the ladies to assist  them in making the dresses for the children in the May Pole dance.

“Among the many philanthropic works done by the members are the distribution of  food baskets among needy families at Christmas time and assistance in the payment of the Women Emergency Home mortgage.”

Fund raising included:  Clubhouse building fund,  Bullard School, endorsing the “preventorium” and “pledging our moral and financial support with a food drive and sewing for same”...

Close contact was kept with clubs throughout the County and District. The Club underwrote expenses for members to attend State and District conventions.  The Club was very involved in General Federation which it joined in 1936.

Luncheon program subjects included:  Home Economics, “an interesting talk on the subject of canning and preserving the fig from a commercial stand point.  We also carried home many thoughts useful to us in our home canning and preserving”.    “Womans Place in the World”,  “The woman in Politics”, “World Affairs”,  the District Chairman of Indian Affairs explained what the government is doing for the welfare of the Indians; Sketches of Indian life;  Plants and Trees;  Constitution of the United States, “a lively discussion of Immigration”.

Mr. Forkner talked to the Club Ways and Means of building a Clubhouse.

And so ....The Fig Garden Woman's Club laid its foundation!